An Introduction to Ugarit

The Ancient Near East—a vast era of epic accounts, powerful empires and beautiful cites—was lost to the Western World for most of Medieval and Renaissance Eras. There were few sources of information which they had about the Ancient Near East: Philo, Herodotus, and the Bible. Recently, however, through the development of modern archeology, knowledge of the Ancient Near East has exponentially expanded. In the middle 1800s, this school of science began to develop, unearthing the treasures of the past. Vast civilizations were exposed, with their artifacts, monuments, and texts.

As they began to piece the ancient world together, they found that the Bible did not develop in a vacuum. Rather, it was written in the middle of a culture which was like its own. The similarities from these other cultures have shed new light on obscure passages of Scripture, helping Bible students understand how to read and interpret what God wrote. One of these cultures more recently discovered is the city of Ugarit. The purpose of this paper is to introduce the discoveries of the city of Ugarit and its implications for Biblical research.

The City of Ugarit

In 1928, an Arab farmer was out in his field near his village of Ras Shamra when he discovered a tomb. Upon entering, he found several artifacts made of gold, and soon his discovery was reported to the Antiquities Department of Syria.[1] In 1929, French Archeologist C. F. A. Schaeffer began to excavate the area. Very quickly, the team became successful in their excavations. The first season of excavation exposed what they later determined was a library, full of tablets. These tablets eventually shook the world of Biblical studies and shaped the way scholars today understand the Bible and its culture.[2] Ninety years later, Ugarit is still under excavations, and the French Mission Archéologique de Ras Shamra – Ougarit continues to excavate it with the hopes of learning more about Ugarit’s ancient past.[3] 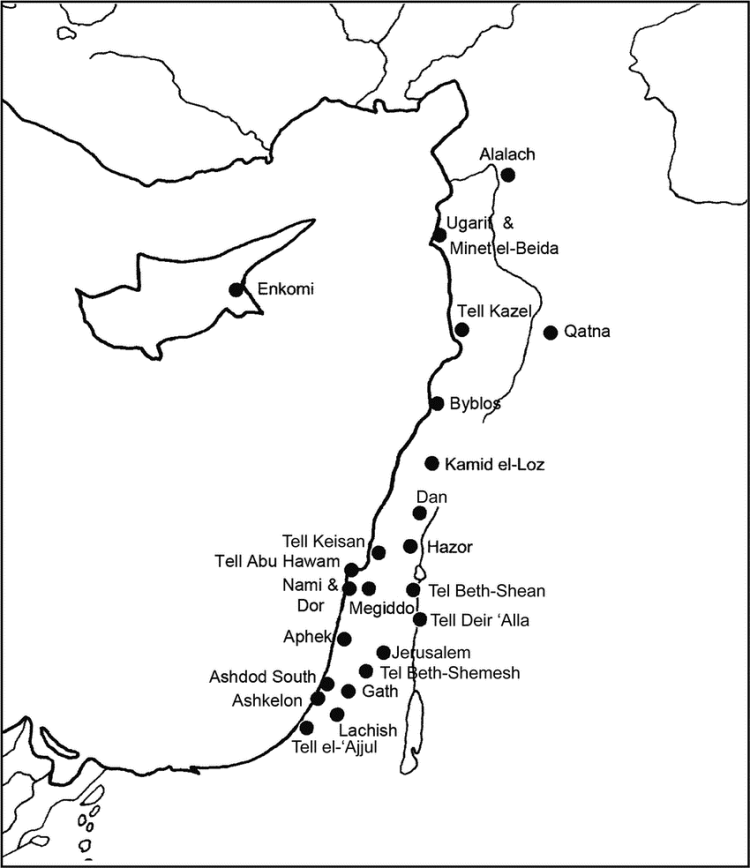 The city of Ugarit lies near Mediterranean Sea, to the north of Israel and just under Turkey. From the northern most tip of the Island of Cyprus, Ugarit is due east.[4] This location was right in the middle of three major areas of power: to the East lay Assyrian Empire, to the North lay the Hittite Empire, and to the South lay the Egyptian Empire. With its Western boarder on the sea, Ugarit was able to trade with Minoan and other sea-faring civilizations.[5] Because of their location in the center of these empires, Ugarit prospered as an economic center in the area and they attracted business from around the region. For example, records from Ugarit show that they also had a substantial population of international business men who came to Ugarit to seek their fortune.[6] However, this position was only a benefit during times of peace. Although Ugarit always maintained some degree of independence, it was repeatedly forced to switch its allegiance between the Hittites to Egyptians, depending upon which empire was more powerful at the time.[7]

Ugarit’s golden age was between ~1350 BC and 1150 BC during the time of the Exodus through the time of the Judges.[8] Thus, the discoveries of Ugarit have the most relevance to parts of the Bible written during these time periods: the Pentateuch, Joshua, Judges, Ruth, Samuel, Job, and some of the Psalms and Proverbs.[9] Outside of these books, the parallelism between Ugaritic texts and the Bible grows increasingly speculative, because it is highly unlikely later Biblical writers knew about Ugarit since its destruction in the twelfth century. However, there may be some exceptions to the general rule, like the link between the Legend of ’Aqhat and Ezekiel’s mention of Daniel (Ez. 14:14, 28:3). But these conclusions must be considered speculative unless documentation from that time period can be established.

The greatest importance for Bible Studies is the language and literature discovered at Ugarit. When French archeologist C. F. A. Schaeffer discovered the tablets, he sent them off to a colleague of his—Charles Virolleaud—to translate. The text was obviously in cuneiform, because it had the characteristic wedge-shaped letters in soft clay. However, the signs were different from other languages written with cuneiform. Unlink normal cuneiform which may have hundreds of symbols, these texts had only 30 distinct characters. Virolleaud concluded that the Script was an alphabetic cuneiform—each symbol representing the different sounds of the language. The new language was called Ugaritic after the city of Ugarit. Over time, the language was deciphered and to date linguists have a good grasp of the grammar of the language. However, there are still parts of the language which we do not understand.[10]

The Ugaritic alphabet is longer than Hebrew having 30 signs, and displays a remarkable attention to distinction between phonemes. The letters parallel the Hebrew alphabet, even though it is shorter; most of the space is made up by adding extra sibilants. The Aleph is rendered three different ways, changing its sign based on the following vowel. If there is no vowel after the aleph, the default sign is ’i. For example, the word ’arašu (ar1) means “to wish”. If it occurs in the yqtl conjugation (Heb. Imperfect), it would be y’irašu (yer1). The aleph becomes vowelless because it is placed against another letter. So the default form would be written as ’i.

When scholars work with Ugaritic texts, they use transliterations, for a few reasons. First, it is for ease of learning when a student is just starting out. It is much easier to work with transliterations than the actual script. Second, the main reason is so that these texts can be compared to other Semitic texts. Semitic languages use many different scripts, and even the same language from different eras may have different scripts. So, for easy cross-script comparisons of languages, the letters are transcribed.[12]

[10] Craigie, “The Tablets from Ugarit and Their Importance for Biblical Studies,” 62–63.

[12] Kevin Cathcart, “The Comparative Philological Approach to the Text of the Old Testament,” in The Old Testament in Its World (presented at the Society for Old Testament Study and Het Oudtestamentisch Werkgezelschap in Nederland en België, Boston: Brill, 2005), 1 n. 1.

The following timeline is from Michael Williams. All the dates given are only approximate years, the exact dates are yet to be determined:[1]